A site visit to South Somerset was an opportunity to detour to Steart Marshes to see the work of the Wildfowl and Wetland Trust (WWT) to recreate an endangered saltmarsh habitat. This low-lying coastal peninsula has been modified many times over the centuries by both nature and man, but in the past decade it has been re-engineered to allow salt water from the Severn Estuary to inundate the land creating a peaceful and fertile environment for birds and other wildlife.

Steart lies at a sharp bend in the estuary where the Somerset coast kinks west into Devon, and the freshwater River Parrett empties into Bridgwater Bay – a once important trading area. It is thought that the Romans built the first sea defences to reclaim marshland as agricultural land, but fluctuating sea level changes over the centuries meant that severe flooding of land and farms has regularly been a seasonal event.

The existing sea wall was breached in 2014 as part of WWT’s improvement works to allow the estuary’s famous high tides to flow up a new creek system around 100 times a year to revert a large part of the peninsula to managed saltmarsh. Salt-tolerant plants are recolonising the mud, providing nesting sites and food as well as reducing the speed and energy of the incoming tide. From the comfort of new hides stocked with identification charts and binoculars, visitors can enjoy an enviable mix of water and land birds, birds of prey and year-round visitors. 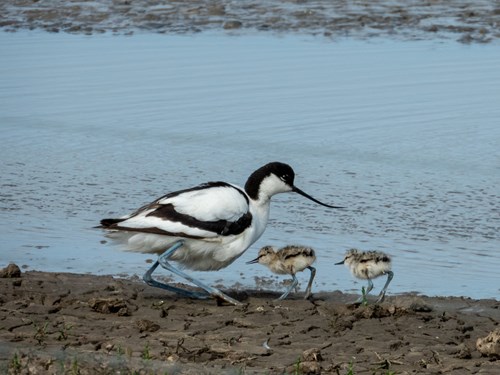 Steart is being championed by WWT as a demonstration site to highlight the importance of wetlands in the race to reverse climate impacts such as species loss, carbon emissions, and rising sea levels. Wetlands punch above their weight as their value is disproportionately high compared to their size.  Globally they contain 40% of all species, with another 200 freshwater species being discovered every year. Yet England has lost 90% of its wetlands in 400 years and they are disappearing three times faster than forests through land drainage, flood barriers, water abstraction and rising temperatures.

Wetland grass, saltmarsh and intertidal mudflats are also a particularly effective carbon sink as plants absorb CO2 as they grow, while boggy soils slow the decomposition of organic matter, locking in the gas while undisturbed and providing perfect conditions for feeding birds.

Steart, which covers 480 hectares, forms part of England’s recently-announced second Super National Nature Reserve which will link it to five other Somerset reserves to encourage nature recovery across the Levels. Recent breeding successes include bitterns, avocets and great white egrets.

There is more information about our vital watery landscapes from the Wetlands Can website which aims to create another 100,000 across the UK .