This time of year the structure and form of trees is readily apparent and none more so than the gnarled skeletons of old orchard trees. These fabulous old specimens have a character and texture which is unique within the pattern of the British landscape. Remnant orchards still exist in unlikely places, close to urban centres and amongst gardens on the village fringe, they provide places for contemplation, a refuge for wildlife and form part of the history of our countryside and the English lexicon.

Orchards were once widespread in Britain with a plethora of apple varieties, many special to individual parishes, the trees dispersed between cottage gardens, farms and manor houses. Local apples were commonplace but the advent of cheap imported fruit and pressure on land to provide housing meant that orchards were seen as redundant and grubbed out to make way for development. Commercial orchards declined from the 1970s onwards and, by 1997, 64% of all British orchards had been lost.

The satisfying glimpse of a densely planted, twiggy orchard grid is now a rarity except in discrete areas still important for commercial fruit production. Though much reduced, there are still perry orchards in Hereford and Worcestershire; cider apples are grown in Somerset and Devon; Cambridgeshire, Essex and Kent still grow cooking and eating apples, pears, plums, cherries and cobnuts. What is particularly sad about the loss of so many orchards is that the UK has such a great climate for growing fruit. English apple types are more diverse in variety, their flesh sweeter than European or Antipodean counterparts and they thrive in our damp loamy soil. With the loss of the fruit goes the rituals and skills of fruit husbandry; the ways of netting cherry trees; picking delicate, plump, short season plums or planting to cross pollinate gages. And the transient beauty of a grid of trees drifted in blossom is no longer a common scene in our landscape. 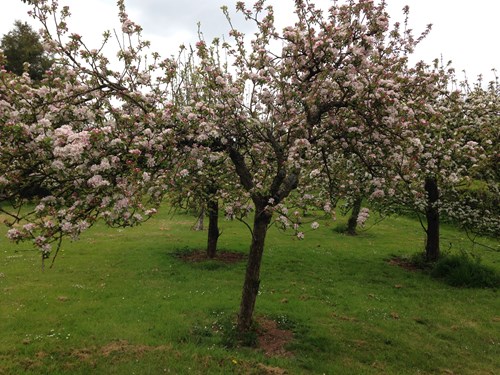 Does the loss of the trees also mean we have lost the casual gift of fruit which our parents knew? The neighbourly camaraderie of bartering fruit; the glut of greengages exchanged for Victoria plums, a surfeit of cookers, wrapped in newspaper and stored in cardboard boxes, the scrumped apples, stolen cherries hanging from a local tree or plums dripping over the garden wall; the pip spitting contests of youth. We used to scour the autumn hedgerows for blue blushed damsons, food for free along with the blackberries and sloes to seep in gin. Old hedgerows fat with bullace and damson, the rootstock of our cultivated plums.

The charity Common Ground campaigns to raise awareness of local distinctiveness and wants Britain to be a prominent fruit growing country once again for environmental, aesthetic, social, cultural and economic reasons, and believes that Community Orchards can help spearhead a revival.

At the 5 Islands School in St Marys, Isles of Scilly, in response to the islanders’ desire for horticultural heritage to be part of the school’s design and use, Novell Tullett planted a small orchard of fruit trees. Within the orchard are Scilly Pearls, apple species which are particular to the islands.

The school has won a Civic Trust Award 2013.