The Boathouse: Modern Methods for Tackling the Housing Shortage

Many people have noticed how quickly the Boatyard development on Totterdown Reach in Bristol has gone up. Work started during the pandemic in August 2020 and the first homes will be occupied by August this year. That will be quite a feat, given the scale of the build and the challenges of supply and staffing over the past two years.

During a recent construction site visit led by Mid Group Director of Operations David Merrills, there was a real sense of purpose, energy and pride about the project. He credited the decision to adopt Modern Methods of Construction (MMC) as the key to making the site viable where many previous attempts had failed. The site was formerly a boatyard, then a petrol station, perched on a narrow and steep 1.2 acre strip of land squeezed between the busy A4 Bath Road and the tidal River Avon. 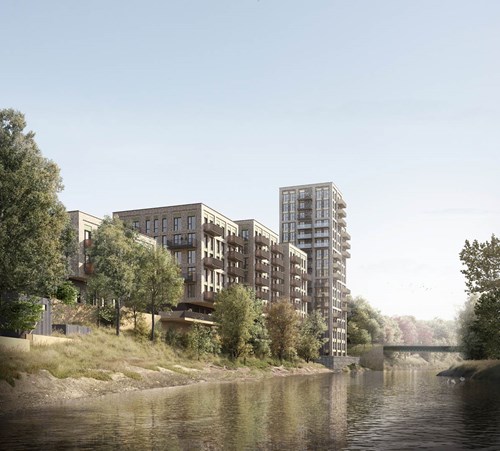 The many constraints included lack of space for scaffolding and materials storage, limited piling opportunities and the presence of a major services route. Site-specific decisions were taken early on to embrace off-site construction, and modular building techniques, so that pre-cast concrete wall and floor panels could be constructed while the foundations were being built. The materials choice also meant that the four blocks could be cantilevered over cable networks and the river bank to achieve the square footage that would make the project viable. The panels arrived fire-proofed and insulated and were stored at a nearby depot until ready to be delivered to site and dropped into place by the two largest cranes in the UK. As we stood on the roofless 13th floor of a 15-storey tower, where the final piece of wall, pre-fitted with windows and balcony doors, was about to be slotted in, it seemed incredible that eight workers could piece together a whole storey in just three days.

The benefits of MMC are many, according to David. It saves on space and time, makes efficiency savings which can then be spent on product quality and it improves site safety and the working environment. The concrete stairwells, for example, are lifted in as one unit with handrails already attached, giving instant safe access to the next floor. Embracing design technology such as BIM also means that every built element is identifiable and traceable. The result is a robust and honest building in which the materiality is celebrated.

David describes MMC is a different way of thinking about building which focuses on people’s needs for homes that are safe, warm, light and good to live in. He likes to focus on the desired outcomes then work backwards to find ways to deliver it. It isn’t always cheaper, he admits, but the wins are a higher build quality and 20% increase in delivery speed. Speed is an important factor in tackling national housing shortages and The Boatyard will also be notable for being a 100% affordable scheme for Clarion Housing with 66 shared ownership and 86 affordable rent apartments.

Inevitably, opportunities for outdoor space were extremely limited, with the tower having one large south-facing balcony garden and a couple of green roofs. However, the addition of opening windows and personal balconies with views over Bristol and the Avon allowed a borrowed connection to the landscape. A cantilevered walkway along the river linking the development to Paintworks, and potentially to the city centre in the future, was also a great part of the site’s appeal.

The tour was organised by Bristol Housing Festival.

Mid Construction can be found at www.mid-group.co.uk/projects/